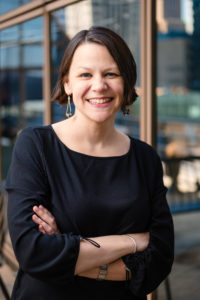 Sarah has been directing events and productions for more than 20 years. Prior to transitioning into special events, Sarah spent 10 years as a theatrical director and producer with experiences nationally at Perseverance Theatre, the Guthrie Theater, Williamstown Theatre Festival and Virginia Shakespeare Festival, and locally at Woolly Mammoth Theatre Company, Round House Theatre, Shakespeare Theatre Company, and Folger Theatre.

In 2007, Sarah combined her artistic and production backgrounds and transitioned into the field of special events. Prior to launching The Side Lobby LLC in 2013, she served as the Director of Special Events at Arena Stage, Special Events Manager at Woolly Mammoth Theatre Company, and Director of Special Events at a small DC-based public relations firm where her clients included Google, Modernist Cuisine: The Art & Science of Cooking, and The Century Council (now the Foundation for Advancing Alcohol Responsibility). Event highlights at Arena Stage include Molly Smith’s 10th Anniversary Celebration, Groundbreaking for the Mead Center for American Theater, and two annual benefit galas featuring original performances with politicos and other notables.

At Woolly she produced Dinner on Stage and the “Like… Totally Woolly!” Benefit Bash in addition to opening night receptions and other donor cultivation and stewardship events.

Sarah is an active member of the International Live Events Association (ILEA), and is current Immediate Past President of the DC chapter. She received ILEA’s Volunteer of the Year award in 2018 and attained the Certified Special Events Professional (CSEP) designation 2012.

A native of the Washington area, Sarah grew up in Fairfax City and has been a Capitol Hill resident since 2002.  She received a BA in theatre from the College of William and Mary and an MFA in directing from Catholic University. Her favorite DC “landmark” is the blue rooster sculpture on the roof of the National Gallery’s East Building, and she loves spending Saturday mornings strolling around Eastern Market with her husband, two kiddos, and an iced coffee with plenty of milk.

" Thank you so much for everything – all the feedback we are hearing is that the entire evening was lovely and seamless and fun and that it all looked gorgeous. We couldn’t have pulled it off without you! " 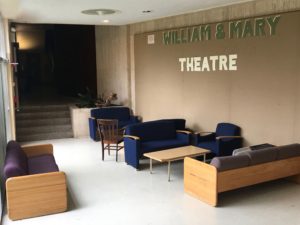 Creating something from nothing required countless late-night brainstorming sessions, most often held in the side lobby of Phi Beta Kappa Hall. It was there that creativity sparked, ideas became reality, and nothing turned into something.

Fast forward 14 years to when Sarah discovered a common theme among her clients while executing special events for various theatre companies: they all needed extraordinary event experiences on limited budgets, reminiscent of her days in college. From there The Side Lobby turned from the spark of an idea into the event consulting and production agency it is today.